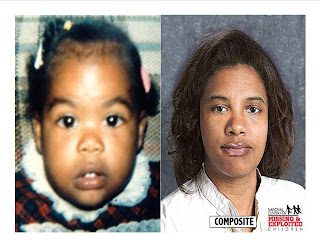 Olisa Susan Williams is shown aged-progressed to 29 years. Olisa was last seen on July 8, 1982 in Ann Arbor, Michigan. There are no details on what she was wearing that day.

Olisa’s mother, Denise Williams, stated on the day of her disappearance she and Olisa’s father, Isiah Williams, were involved in an altercation. He knocked Denise down, took Olisa from her arms, and left with the child.

Isiah states that he had been drinking that day, as well as, smoking marijuana. He remembers driving to Island Park and falling asleep on a bench. He left Olisa in the car while he slept. When he woke up the door to his vehicle was open and Olisa was gone. He stated he did not report Olisa missing at first because he thought her mother or other relatives had taken her.

Isiah changed his story on many occasions. First it was someone took the baby, then he lost the baby, killed her, she died in a hospital, and “the child was across the water.” The Huron River was search but there were no signs of Olisa.

At one point Isiah was arrested on a parole violation and to avoid being charged he told the judge he had information about Olisa. He stated he would only speak up if his charges were dropped. The judge refused.

Denise searched many years for Olisa. She even reported her daughter’s disappearance to the National Center for Missing & and Exploited Children, making it one of the first cases for the agency. The center didn’t officially open until a year later. In more recent years investigators have not been able to locate either of Olisa’s parents. 1992 was the last time someone spoke to Denise and she stopped responding to letters.

Olisa’s case has gone cold and investigators hope that one day someone will come forward with information that will finally break the case. They believe there is a possibility that Olisa may still be alive. Olisa is listed as a Non Family Abduction. If you have any information in the case of Olisa Susan Williams please contact The Ann Arbor Police Department (Michigan) or The National Center for Missing and Exploited Children.

Peas in Their Pods Staffer
Posted by The Rilya Alert at 9:12 AM No comments: 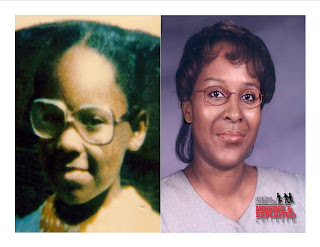 Toya Hill is shown age progressed to 34 years. Toya was last seen on March 21, 1982 in the 200 block of South Spring in Baltimore, Maryland. Toya wears glasses but was not wearing glasses at the time of her disappearance. She has a deep dimple on her left cheek. There is no indication on what she was wearing the day of her disappearance. Toya was in 3rd grade at City Springs Elementary in Baltimore.

On the day she went missing, Toya left her home to walk to a local store. On her way Toya talked to her mother’s ex-boyfriend and a friend of his. Both have been cleared as suspects. Toya’s mother was at a wedding dress fitting and was getting ready to be married in three days. Toya was to be the flower girl. After Toya’s disappearance her mother decided to proceed with the wedding in hopes that it would encourage someone to speak up about Toya’s disappearance. No one came forward and Toya has not been seen or heard from since.

Peas in Their Pods Staffer
Posted by The Rilya Alert at 9:21 AM No comments: