We are being told that the missing Madison County toddler case is now being treated as an abduction.
On Sunday evening the Mississippi Highway Patrol issued an Amber Alert for two-year-old Myra Lewis of Camden.
Multiple agencies were searching for the missing 2-year-old, who was last seen Saturday morning.
Metro One was also assisting in the search for the missing toddler on Sunday.
The search was called off Monday after the case classification changed.
Madison County Sheriff Randy Tucker met with members of the FBI Monday.
Myra Lewis was last seen at her parents' home on Mount Pilgrim Road in Camden Saturday morning.
"Parents stated they last saw the two year old around 10 am yesterday (Saturday) morning there were several kids there. The father was watching an infant child inside the other children went outside to play and the two year old wandered off," said Sheriff Randy Tucker, Madison County Sheriff's Office. "We've searched approximately four square miles around this residence and unfortunately have not been able to locate Myra."
Sunday morning emergency crews continue to look for her in a rural area along Mount Pilgrim Road, where the family lives.
Madison County Sheriff Randy Tucker said the toddler went missing around 10 a.m. Saturday, but his office didn't receive a phone call until 4 o'clock Saturday afternoon.
That's when several police agencies volunteers, and rescue crews started their search.  Even local volunteers pitched in.
"I thought about my baby and it could have been my baby and it's so sad she only 2 years old and it just deepens my heart because it could have been my child he's 2," said Cassandra Bacon, a local volunteer.
The family was too devastated to go on camera Sunday night, but Myra's mother did talk to us over the phone.
"I was leaving to go grocery shopping and I saw her walk back into the house with her sister," said Ericka Lewis, mother of the toddler.
Lewis said the child's father was inside the house.
Lewis described the toddler as 34" tall and weighs about 25 pounds.
Lewis said the little girl was last seen wearing a turquoise sweater with a black bear on the front and khaki pants with pink shiny shoes (tennis) with glitter on them.
Lewis said sometimes little Myra sucks her thumb upside down.
"We've got approximately 70 individuals in the woods here right now like I said we had about 250 last night so we've had the average Joe citizen, men, women and children come out. Anytime there's an infant involved especially one of this age you kind of pull at the heart strings of the community so we got the help," said Sheriff Tucker.
"We just want her back home. We won't worry about pressing charges, we just want her back home safe," said Lewis.
If you have any information on Myra's whereabouts, please call 855-642-5378. 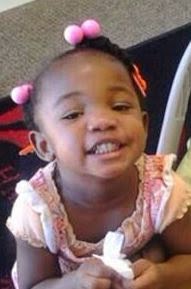