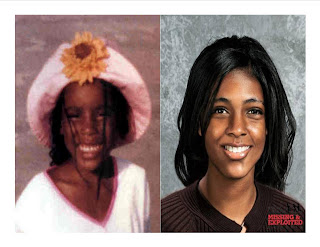 Age At Time Of Disappearance: 5

Ashani was last seen by her mother on March 21, 1997 in Orlando, Florida. Her photo is shown age-progressed to 17 years old. Ashani may also go by the name of Karin.

Ashani was abducted by her non-custodial grandparents Ernest S. Jackson and Kaia Jackson. In August, 1998 the Jacksons moved to Tulsa, Oklahoma. The Jacksons were arrested in October of 2000 on unrelated child abuse charges of one of their sons which took place in 1998. When they were located there was no trace of Ashani and to this day they refuse to give any information on her whereabouts. They are the prime suspects in Ashani’s disappearance.

If you have any information concerning the case of Ashani Karin Creighton please contact The Orange County Sheriff’s Office (Florida) or The National Center for Missing and Exploited Children.

Peas in Their Pods Staffer
Posted by The Rilya Alert at 9:09 AM