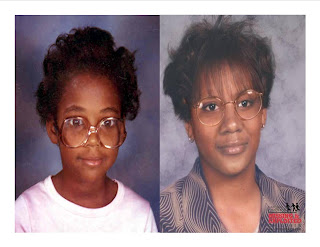 Tiffany Michele Goines is shown aged progressed to 32 years. Tiffany was last seen on December 5, 1987 getting into a red convertible in Frederick, Maryland. At the time of her disappearance Tiffany was wearing a white sweatshirt, brown gloves, blue pants, a white belts, white shoes and socks, and large round brown framed glasses.

Tiffany left her home at the John Hanson Apartments on north Bentz Street, which was demolished in 2005, to run errands for a neighbor. When she didn’t return in the evening her mother went searching for her. When she couldn’t find Tiffany she contacted the police. Because of procedures in place at the time Tiffany’s mother had to wait 24 hours to file a missing persons report.

Tiffany’s mother slept on the couch every day after her daughter’s disappearance in hopes that she would be right there should her daughter come knocking on the door in the middle of the night. She has since moved but still lives in the area. She describes Tiffany as cheerful and very helpful. Tiffany was in the 6th grade attending Governor Thomas Johnson Middle School at the time of her disappearance. Her mother believes she was abducted.

Law enforcement say they have not received any new leads for some time now and that Tiffany’s case remains unsolved. If you have any information concerning the case of Tiffany Michele Goines please contact The Frederick Police Department (Maryland) or The National Center for Missing and Exploited Children.