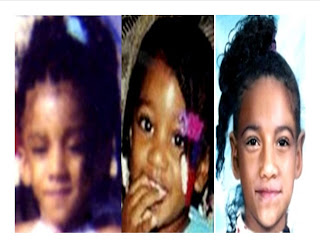 Missing Since: November 14, 2005 from Aurora, Colorado

Age At Time Of Disappearance: 6

Aarone was last seen near her home on November 14, 2005 from Aurora, Colorado. Her photo is shown age-progressed to 8 years old. Aarone was last seen wearing a white sweater, a gray hooded sweatshirt, pink sweatpants, white sneakers, and a pink rubber band in her hair.

Her father, Aaron Thompson, reported her missing. He said that Aarone had run off after an argument over a cookie. After investigating Aarone’s case and going to her home police discovered far worse. Law enforcement concluded that Aarone may have been killed years ago. After checking with area schools police discovered Aarone had never been enrolled nor had she been registered as homeschooled. While searching the home investigators could not find any recent photos of Aarone, no bed for her, and none of her DNA was found in the home. They concluded that Aarone had been dead for at least 18 months.

To make matters worse Aarone’s father and then live in girlfriend Shely Marie Lowe were very uncooperative. They wouldn’t allow the police to search certain parts of the home or interview their other children who were also living in the home at that time.

Aarone’s mother, Lynette Thompson, was living in Detroit, Michigan at the time and did not know the whereabouts of her daughter as Aaron Thompson refused to tell her. She admits that she struggled with drug abuse in the past but is now clean. Lynette Thompson has long been cleared as a suspect.

On November 10, 2009 Aaron was sentenced to 114 years in prison charged with 31 counts ranging from conspiracy to commit child abuse, false reporting to authorities, concealing death, conspiracy to conceal death, child abuse resulting in injury and contributing to the delinquency of a minor. Just before the trail he admitted that his daughter was dead. During the trail the remaining children told horrific stories of their lives growing up in the home of Aaron Thompson and Shely Lowe. Lowe died suddenly at the age of 33 of heart disease. She refused to speak to the police involving the case and was never formally interviewed.

On November 30th, 2009 on what would have been Aarone’s 11th birthday, just 20 days after her father’s sentencing, a memorial was held in her memory.

On September 18, 2011 Peas in Their Pods featured Aarone Thompson’s story on our BLOG TALK RADIO Channel. You can listen to the broadcast below.

Aarone Thompson’s body has never been found and her case remains open as a lost, injured, and missing child. We need to bring this precious girl home. If you have any information concerning the case of Aarone Thompson please contact The Aurora Police Department or The National Center for Missing and Exploited Children. Detailed information on the trial can be found HERE.

Peas in Their Pods Staffer
Posted by The Rilya Alert at 8:14 AM