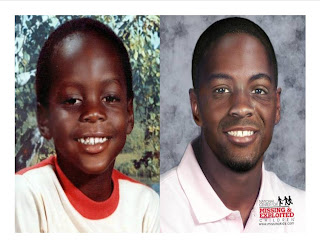 Corey Gilbert is shown aged progressed to 31 years. Corey was last seen on December 16, 1984 in Jefferson, LA. Two of Corey’s bottom teeth were missing at the time of his disappearance. He was wearing a blue tank top with white trim, blue jeans, and blue tennis shoes with red stripes.

Reports have stated Corey was last seen walking to the store in his neighborhood on the day he went missing. There are other reports that Corey was last seen with his cousin by the Mississippi River. It is believed that he may have fallen into the river although his body has never been recovered.

If you have any information concerning the case of Corey Gilbert please contact The Jefferson Parish Sherriff’s Office (Louisiana) or The National Center for Missing and Exploited Children.

Peas in Their Pods Staffer
Posted by The Rilya Alert at 9:02 AM