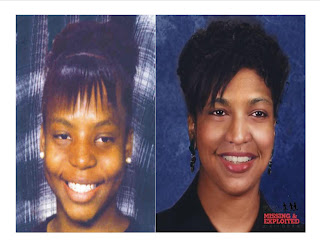 Missing Since: October 30, 1998 from Montgomery, Alabama.

Kimberly was last seen at the CVS Pharmacy on Third Street and Forest Avenue in Montgomery, Alabama on October 30, 1998. Kimberly's photo is shown age-progressed to 26 years.

When last seen Kimberly had told her mother she was going to the CVS pharmacy at around 4:00 or 5:00p.m. to purchase candy and a soft drink. She was planning her Christmas shopping on the day of her disappearance and spoke to her father about it.

In an interview conducted by Philip Rosenbaum in 2010 Kimberly’s father Walter Arrington stated, "I've been going through this for the last 12 years, and I feel like this might be my last chance of ever seeing my daughter or somebody recovering her." He describes his daughter as "a good girl" who enjoyed listening to music, dancing and learning computers at school, where she was well-behaved. He also believes that it is because of her good nature and kindness that may have led to her disappearance. He believes that someone may have stopped to ask her for directions and then when they got her close enough to their vehicle they grabbed her.

Mr. Arrington also stated, "and I can't go on any further, because I'm at a standstill until I find out what happened to her. It is something that I carry with me every day.'' It seems as though her mother felt the same way because although see was ill and died in 2005 many say it was not the illness but a broken heart that lead to her death.

Capt. Keith Barnett of the Montgomery Police Department stated, "We had nobody that saw her get snatched up. Nobody found her purse or jacket or anything on the side of the road,'' Barnett said. "She just disappeared. She left home and disappeared.'' Montgomery police officials have stated that they have interviewed everyone possible including known sex offenders in the area. There were no surveillance videos from the store, no signs of a struggle, nothing.

Someone had to have seen something. If there is someone out there who knows something about the disappearance of Kimberly Nicole Arrington please contact the Montgomery Police department or The National Center for Missing and Exploited Children. It’s time to bring Kimberly home.

Investigating Agency
If you have any information concerning this case, please contact:
Montgomery Police Department
(334) 241-2708
OR
The National Center For Missing and Exploited Children
(800) 843-5678 (1-800-THE-LOST)