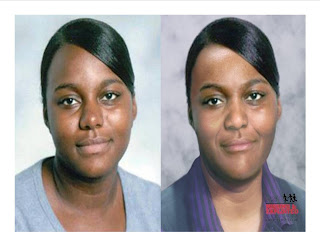 LaQuanta Nachelle Riley is shown age progressed to 24 years. LaQuanta was last seen by relatives in Montgomery, Alabama on December 7, 2003 at approximately 11:30pm. She was getting into green car, which may be either a Taurus or Caprice. LaQuanta has a scar on her nose and pierced tongue and ears. She has tattoos of “RIP Mesha” on one bicep and her name “LaQuanta” on the other.

In 1998, LaQuanta was Valedictorian of her 9th grade class. She gave a speech that has been described as both moving and very touching. She stated in her speech about how blessed she was to have a host of mothers, her birth mother, her aunt, and her cousin, who had been her “God sent” mothers.

LaQuanta’s family has also stated that she is a firm believer in God. She was raised in a Godly home. They also stated that at an early age, she learned the benefits of prayer and she believes in prayer.

LaQuanta has not been seen or heard from since the day she went missing. She is listed as Missing. There is a $5000 reward in her case. If you have any information in the case of LaQuanta Nachelle Riley please contact The Montgomery Police Department (Alabama) or The National Center for Missing and Exploited Children.

Peas in Their Pods Staffer
Posted by The Rilya Alert at 10:01 AM