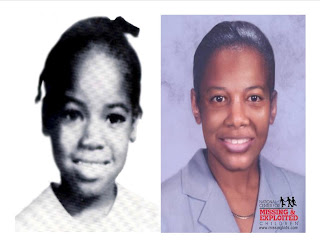 Tracy Lynn Davenport is shown age progressed to 40 years. Tracy was last seen leaving for school at around 11:00am in San Rafael, California on April 27, 1973. She never made it to school that day and has not been seen or heard from since. Tracy was wearing a blue and black flowered dress on the day she went missing. She also has burn scars on her lower hip and abdomen.

At the time of her disappearance Tracy was living with her mother, grandmother, and other relatives in Room 49 at the old Bermuda Palms Motel – now Room 149 of the Motel 6 at 737 E. Francisco Blvd.. Her parents were separated at the time. Tracy was a kindergartener at the nearby Bahia Vista School. When she didn’t return from school that evening her family realized something was wrong. However they did not report Tracy missing until the next morning.

Once Tracy was reported missing investigators began searching for evidence and questioning people who lived in the area. One witness stated seeing Tracy walking to school and being followed by a black or dark green car. The witness stated it followed slowly behind on Canal Street as she walked to school.

For years rumors swirled around that Tracy had been killed and then buried somewhere on the grounds of Bermuda Palms. Thirty-six years after Tracy’s disappearance two retired investigators who had always been haunted by Tracy’s case, and were young police officers and the time she went missing, decided to take another look into Tracy’s disappearance.

A team was pulled together to search the grounds of the old Bermuda Palms. They were able to search an area around the pool, which is now covered by flooring. They were also able to breach a crawl space near the pool. They were not physically able to search the area due to the air in the crawl space being deemed as dangerous however they were able to examine the space with a telescope camera. A few pieces of wood and a pair of old safety glasses were the only items found. There was no sign of Tracy.

Although Tracy was not found investigator felt a sense of relief that they now could put rumors to rest that Tracy was buried somewhere on the old grounds of Bermuda Palms. The case remains open today and officials believe that someone out there has information on the whereabouts of Tracy.

Tracy’s family is very grateful that her case remains open and that search efforts still continue but they also feel that the case was botched from the beginning when her disappearance was not taken seriously. She was classified as a runaway in the beginning and they believe because of this investigators ignored what could have been important clues while the case was still warm.

Sadly we may never know what happened to Tracy. Her family has set up a reward of $500 and the Independent Journal has given an extra $1000 in hopes that there is someone out there who has information that brings Tracy home. Tracy’s case is now listed as Endangered Missing. If you have any information regarding the case of Tracy Lynn Davenport please contact The San Rafael Police Department (California) – Missing Persons Detail or The National Center for Missing and Exploited Children.

Peas in Their Pods Staffer
Posted by The Rilya Alert at 9:08 AM