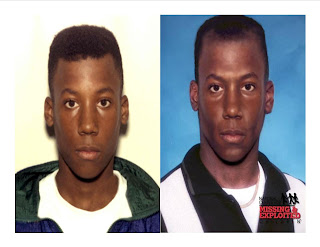 William Walter Brooks Jr. is shown age progressed to 34 years. William was last seen at his home on August 24, 1992. On the day he went missing William was wearing a black baseball cap, a black and purple t-shirt, baggy black jeans, and a black and purple sneakers. He has a pierce left ear and wears glasses. William also has scars on his right shoulder, both knees, both hands, his left finger, and his chin. He has discoloration on his chest and shoulders and a dimple on his right cheek. Six of his teeth have fillings. William’s nickname is “BB.”

Investigators believe William might of had some disagreements with gang members and could have been fearing repercussions. Investigators also believe William may have traveled to Hagerstown, Maryland or New York. William has not been seen or heard from since the day he went missing and his case remains unsolved.

William’s case is listed as Endangered Missing. His DNA and dental records are available to positively identify him when he is found. If you have any information in the disappearance of William Walter Brooks Jr. please contact The Frederick Police Department (Maryland) or The National Center for Missing and Exploited Children.

Peas in Their Pods Staffer
Posted by The Rilya Alert at 11:39 AM