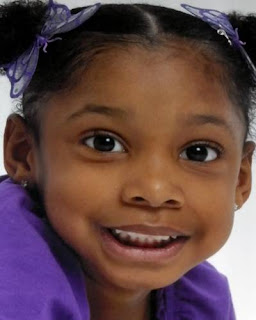 On October 11, 2011 a beautiful child named Jhessye Shockley was reported missing. Her mother, Jerice Hunter stated she left her apartment to run errands and upon her return Jhessye was nowhere to be found. At the time, law enforcement believed Jhessye may have unlocked the door and wondered out.

A massive search was conducted. Law enforcement, as well as many volunteers, scoured the area in search of Jhessye. She had simply vanished. As the case went on officials began to look at clues in Jhessye’s home.

Clues show Jhessye may have disappeared weeks before she was reported missing. School records show that Jhessye was last seen at school in September. Jerice, (Jhessye's mom) stated she kept her out of school due to pink eye and other health issues.

As investigators began to dig deeper Hunter grew angrier stating that law enforcement was not giving her daughter’s case the attention it deserved because Jhessye is black, and too much emphasis on her. She even went to the Arizona state capital to protest the fact that her daughter’s case was being overlooked.

But perhaps there was reason to investigate Hunter as the evidence grew. Soon after Jhessye was reported missing her teenage sister began to speak up while in foster care. She stated she last saw Jhessye in September. She said Jhessye was beaten and put in a closet. She was deprived from food and water weeks prior to her disappearance. She also stated that the last time she had seen Jhessye, she looked like a zombie and the closet smelled like dead people. It was even more riveting when the teenager stated her mother instructed she and her other siblings lie about the last time they saw Jhessye.

Jhessye’s sister raised even more eyebrows when she stated that she had witnessed her mother cleaning the entire apartment with bleach just a few days before Jhessye was reported missing, particularly her shoes and the closet where she had last seen Jhessye.

Investigators also discovered that Hunter is no stranger to child abuse. In October 2005 Hunter and her then husband, George Shockley, were brought in on charges of child abuse. She pleaded no contest to corporal punishment and even served four years in prison. She was released in May 2010.

George Shockley , a convicted sex offender, is still in a California prison.

A few weeks after Jhessye was reported missing Jerice Hunter was held on a $100,000.00 bond at the Maricopa County Jail for a felony count of child abuse. She was released on November 28, 2011 because the Maricopa County Attorney’s Office failed to file charges against her before the 48 hour deadline. The County Attorney’s Office stated this was done intentionally to avoid double jeopardy should the court find insufficient evidence in the case of Jhessye.

Most recently police have begun a search of the Butterfield Station Landfill, about an hour south of the Valley, in hopes of finding Jhessye’s body. Investigators have stated that they believe precious Jhessye has been murdered and her body was dumped in a trash bin in Tempe. They believe it was then that the contents of that bin were transported to the landfill. Law enforcement strongly believes they will find Jhessye’s remains in the landfill although they are not saying what brought them there. 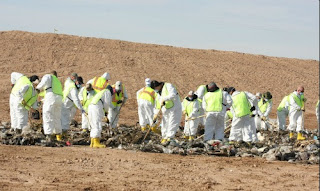 The search continues to date and officials have stated it can take well over 6 weeks to complete the search. It is hard to realize that this beautiful child may be among a field of waste. If Jhessye is there, it is important that she is found so she may have a proper burial. No child should be in a landfill. Jhessye deserves justice.

Jerice Hunter was on Peas In Their Pods radio show and has denied any involvement in Jhessye's disappearance. The question still remains: Where is Jhessye Shockley?

Jhessye was five years old at the time of her disappearance. She disappeared from 45th Avenue and Glendale Avenue in Glendale, AZ. She has black hair and brown eyes. She is 3’5” tall and weighs 55 pounds. She was last seen wearing a white t-shirt, blue jean shorts, and pink sandals. Her case is listed as Endangered Missing. There is a current reward of up to $25,000.00 for any information leading to the location or information leading to the resolution of her case. If you have any information in the case of Jhessye Shockley please contact:

The Glendale Police Department (Arizona) at:

The National Center For Missing & Exploited Children at:

Peas in Their Pods Staffer
Posted by The Rilya Alert at 11:20 AM