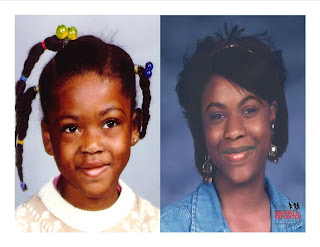 Tilawna Denise Cheatham is shown age progressed to 27 years. She was last seen in her hometown of Aiken, South Carolina on August 11, 1989. Tilawna was last seen wearing a white shirt, red flower printed shorts, and tennis shoes. She may also go by the name of Tawana. Tilawna was an honor roll student at North Aiken Elementary School.

Circumstances surrounding her disappearance state that Tilawna grew upset with her mother after being told she could not stay with her relatives, whom she had been visiting that day. She was told she had to come back home. This made Tilawna angry to the point that when she arrived home she took spare change from a jar, then left her residence located on Jack Jones Street near Highway 19.

Even though Tilawna was only 8 at the time, she had a history of running away. There are reports that Tilawna was later seen by two neighbors at a convenience store called Quick Stop at around 5:30pm just a few blocks from her home.

It has also been reported that Tilawna’s grandmother was arrested and charged with obstruction of justice in her case. Law enforcement has stated her grandmother lied several times when asked about the circumstances surrounding Tilawna’s disappearance. Although her grandma has not been named as a suspect, they believe she may be hiding information about what happened to Tilawna.

Tilawna has not been seen or heard from since the day she went missing. Her case remains unsolved and she is listed as Endangered Missing. If you have any information regarding the case of Tilawna Denise Cheatham please contact The Aiken County Sheriff’s Office (South Carolina) – Missing Persons Unit or The National Center for Missing and Exploited Children.

Peas in Their Pods Staffer
Posted by The Rilya Alert at 8:53 AM