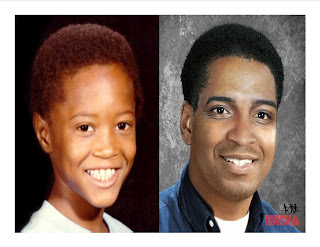 Myron Timell Traylor is shown age progressed to 36 years. Myron was last seen around 6:00pm walking with his mother in Phoenix, Arizona on July 27, 1988. He was wearing red and white striped shirt, blue and white print shorts and white sneakers. He also has a ½ inch scar on the right side of his head.

On the day he went missing, Myron and his mother walked from their home to his grandparents’ house. His home is about one half block from his grandparents’ home on east Pecan Rd. They were to do laundry at the home and Myron had a bag of laundry with him at the time of his disappearance. While on their way, Myron decided to stop at a nearby stand called OK Fish-N-Chips, which is located at 16th St. and Southern Avenue, to get a soft drink. His mother decided to walk ahead and meet up with Myron at his grandparent’s house. He never made it.

Hope came to Myron’s case in 1991 when investigators received a letter that claimed Myron was buried on a private property near 24th Street and Jones Avenue in Phoenix. Officials searched the area but there was no sign of Myron or any other evidence. Although there was no evidence found law enforcement believes Myron was killed and buried nearby the area he went missing.

There is no other information in the case of Myron. In 2002, 14 years after his disappearance, Myron’s mother died. Myron’s case is listed as a Non-Family Abduction. If you have any information on the case of Myron Timell Traylor please contact The Phoenix Police Department (Arizona) – Missing Persons Detail or The National Center for Missing and Exploited Children.

Peas in Their Pods Staffer
Posted by The Rilya Alert at 9:44 AM