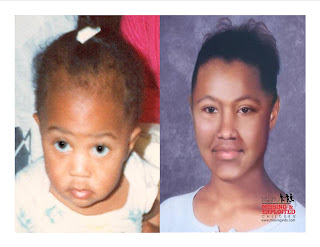 Aleacia Di’Onne Stancil is shown age progressed to 15 years. Aleacia was last seen by her mother on December 19, 1994 in Phoenix, Arizona. Aleacia was born premature and addicted to drugs and for this reason may have some medical problems.

In the days leading up to Aleacia’s disappearance her mother, Toni Stancil, had been living with her mother. Toni was known to have had a hard life and at the time was a known drug addict and prostitute. She even was on parole at the time of Aleacia’s birth. It is reported that on the day Aleacia allegedly went missing Toni had gotten into a disagreement with Aleacia’s grandmother. Toni left the home with Aleacia and met up with an African American female friend named Dee at the Green Way Motel located at 1208 West Van Buren Street.

Toni stated she then asked Dee to watch her daughter while she stepped out to clear her head. When she returned neither Dee nor Aleacia were anywhere to be found. The case grows more complicated because Toni did not go to the police once she discovered her daughter was missing. It would be three months later when she reported Aleacia missing. Toni had been picked up by police on unrelated charges and it was then that she told the police her daughter was missing. She said she didn’t say anything prior to that day because she feared being arrested due to a parole violation.

Police were never able to find Aleacia or Dee. Furthermore, to make it even more difficult for law enforcement to solve this case, Toni was found murdered in December of 1995. Her murder remains unsolved. Now without the key eye witness, and very little details about the person who may have taken Aleacia, the case has gone cold.

Law enforcement has reached out to every possible outlet such as hospitals, social service agencies, day care centers, and adoption agencies. They were successful at obtaining DNA from Aleacia’s living relatives and have since entered the information into CODIS. If Aleacia is found there will be a way to positively identify her. Her case is listed as endangered missing. If you have any information regarding the disappearance of Aleacia Di’Onnes Stancil please contact the The Phoenix Police Department (Arizona) or The National Center for Missing and Exploited Children.