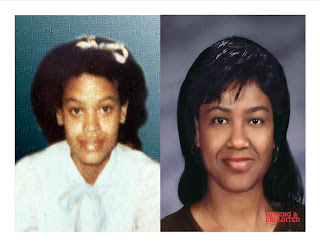 Kelly Jean Harris is shown age progressed to 34 years. Harris was last seen at her family's Jackson, Michigan home on August 10, 1984. She has a gap between her upper teeth and she occasionally wears eyeglasses. Her mother returned home from work to discover Harris was missing. Kelly was last seen riding a red 3-speed bicycle. Her bike was located the same day in a park quite a few miles from her home.


Kelly was living with her father in Pasadena, Md., that year but traveled to Jackson to spend the summer with her mother. It was to be the last stop before Kelly moved to California to live with her great-aunt. Her mother last saw Kelly, who was upset about not going to the county fair, riding her bike in front of the house August 11. Her bicycle was last seen sitting at the entrance to Ella Sharp Park. Family and friends searched in vain for her.

In 2006, the original suspect confessed to raping and murdering the girl and burying her body. He was the girl's stepfather. He is currently in prison and won't be tried in Michigan unless he lives until 2036, his scheduled release date. The girl's body has not been found.

It should be noted that Kelly is listed on NCIC as a black female, however, she is biracial and biracial is not an option in NCIC so race is based on the predominant feature.

If you have any information concerning the case of Kelly Jean Harris please contact The Jackson County Sheriff’s Office (Michigan) or The National Center for Missing and Exploited Children.

Peas in Their Pods Staffer
Posted by The Rilya Alert at 7:48 AM