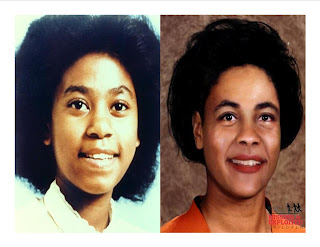 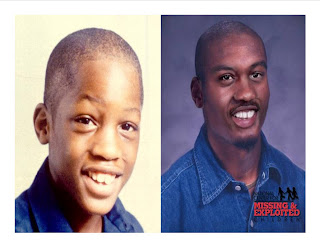 Here is yet another case where two of our children have gone missing from the same place never to be found. In the first case Christine Green is shown aged progressed to 38 years. She was last seen at her family’s home in Philadelphia, Pennsylvania on April 23, 1985. She left for school at Bartram High School and was never seen again. Christine was last seen wearing a pink blouse, blue vest, jeans, and black shoes. Christine had her kidney removed in July of 1984 and has a scar on her left flank. Christine may also go by the name of Dinkie. There are very few details in the case of Christine Green.

Authorities believe Christine’s case may also be related the disappearance of Allen Briscoe who also went missing from the very same Bartram High School on December 13, 1985. Allen is shown age progressed to 39 years. Allen was last seen wearing a black jacket and blue jeans. He has a lump on his left shoulder and is bowlegged. Allen also has a scar on his forehead. One of Allen’s front teeth was chipped at the time he went missing. He may also go by the nicknames “Squeak” or “Squeaky.”

Neither of these two cases have a lot of details. If you have any information concerning the cases of Christine Green or Allen Briscoe please contact The Philadelphia Police Department (Pennsylvania) – Missing Persons Unit or The National Center for Missing and Exploited Children.

If you have any information concerning this case, please contact:
The Philadelphia Police Department (Pennsylvania) – Missing Persons Unit
(215) 685-1180
OR
The National Center For Missing and Exploited Children
(800) 843-5678 (1-800-THE-LOST)

Peas in Their Pods Staffer
Posted by The Rilya Alert at 10:09 AM