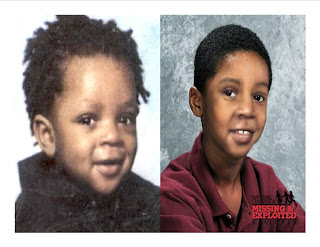 Jyrine Harris is shown age progressed to 9 years. Jyrine was last seen on June 23, 2002 sleeping in his upstairs bedroom at 1:00am. The home is on 40th street in Irvington, New Jersey. He was last seen wearing a diaper with Muppet Characters. Jyrine has a scar above his right eyebrow, a scar on the inner part of his right arm, a scar on the inner part of his upper left arm, and a birthmark on his back. He also was wearing a cast on his right leg from knee to toe, with writing on it, at the time he went missing. Jyrine’s nicknames are Fat Boy, Fat Man, Pooh, Poppa Babba. He has a rare disorder called Ostogenesis Imperfecta which causes brittle bones that break easily.

Jyrine’s 4 year old cousin, who shared a room with him, stated a Causcasian man and African American man came in and took Jyrine. At the time of his disappearance Jyrine’s teenage sister LaElisa Harris and her boyfriend Gregory Jones-McCrae were downstairs watching television. Police have stated that Jones-McCrae has not been cooperative in the investigation.

Jyrine lived with his grandmother and eight other people, including LaElisa, at the time of his disappearance. He had been taken from the home of his mother, Janet Harris, on May 31 after she was arrested on charges of abusing him. Janet was still in police custody at the time her son disappeared. (The charges against her were dropped after his disappearance, as it was determined that Jyrine could have sustained his injuries as a result of his bone disease rather than from abuse.) Authorities do not believe Jyrine was taken by either of his parents.

It is not likely that Jyrine walked out of the house on his own due to his broken leg. There is little evidence related to Jyrine’s disappearance and the case remains unsolved. If you have any information concerning the case of Francillon Pierre please contact The Irvington Police Department (New Jersey) or The National Center for Missing and Exploited Children.

Peas in Their Pods Staffer
Posted by The Rilya Alert at 9:18 AM