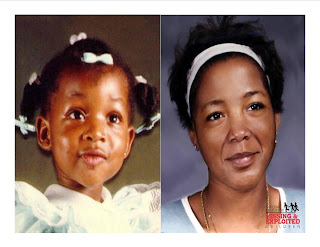 Kimberly Janis Boyd is shown age progressed to 24 years. Kimberly was last seen in Orangeburg, South Carolina on April 3, 1987. She attended a Gospel concert with her mother Sarah Boyd and her mother’s friend Linda McCord in Walterboro, South Carolina. The two women were both 32 at the time of their disappearance. They were driving through Dorchester County where they were seen by witnesses driving slowly with another car behind them. The witnesses were unable to describe the occupants inside the second car but stated the vehicle followed them along Route 15.

Their car was later found 2 days later by Linda McCord’s husband. It was abandoned near the intersection of Highway 15 and 176 in Dorchester County. At the time foul play was not suspected so the car was not processed at the crime scene. Kimberly, her mother, and McCord have not been seen or heard from since.

One possible update did occur in 2009 when someone made a possible connection with a child’s unidentified remains found in Georgia in 1988 and Kimberly. The child’s body was found in Ware County, Georgia wrapped in a brown blanket placed in a gym bag, in a cement filled suitcase inside a TV console cabinet. The child was wearing pajama pants and a white pullover shirt with a red pony emblem in upper left chest area. The child’s body bore a strong resemblance to Kimberly. More about the Jane Doe Baby can be found here: http://gbi.georgia.gov/00/case_detail/0,2695,67862954_74030338_129237378,00.html

To add to this discovery investigators have decided to look further into this case and have also discovered that at the time Kimberly, her mother, and McCord went missing Kimberly’s Father worked in construction in the cement business building roads. When the unidentified remains were found he was working in the South Georgia area at the time.

Law enforcement continues to work on this case but have not made any updates since the possible connection made in 2009. Foul play is now suspected in the case of missing Kimberly Janis Boyd. If you have any information involving this case please contact The Dorchester County Sheriff’s Office (South Carolina) – Missing Persons Unit or The National Center for Missing and Exploited Children.

If you have any information concerning this case, please contact:
The Dorchester County Sheriff’s Department (South Carolina) – Missing Persons Unit
(843) 873-5111
OR
The National Center For Missing and Exploited Children
(800) 843-5678 (1-800-THE-LOST)

Peas in Their Pods Staffer
Posted by The Rilya Alert at 9:59 AM