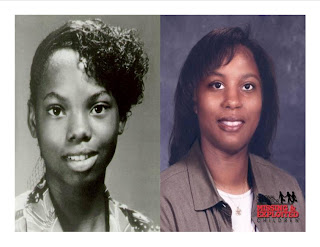 Tonetta Y. Carlisle is shown age progressed to 34 years. Tonetta was last seen on March 15, 1989 outside 615 Hamilton Avenue and Dallas Road in Chattanooga, Tennessee. According to an eye witness, who was on Ruth Street near Hamilton Avenue, she observed Tonetta walking down the street when she was then seen being pulled into a tan and yellow van by several unidentified suspects at approximately 2:55pm. She was on her way home from City High School. Tonetta was wearing a pink and white striped blouse, a denim skirt, and white tennis shoes. She has curly hair, trimmed short on the top and sides, and longer in the back. Her ears are also pierced.

The witness and her husband chased the van as it pulled away and were able to give police a license tag number of the van. Unknowing what had happened just one-half block from her home, Tonetta’s mother became worried when Tonetta did not return home from school. After eight hours of searching, Tonetta’s mother filed a missing child report. The two cases were not connected until two days later.

When the two cases were finally connected the license number of the van was traced back to Jeffrey Jones. It was discovered that Jones had been released from prison, after serving eight years on charges of rape and aggravated sexual assault, shortly before Tonetta disappeared. When law enforcement had finally caught up to Jones he had committed suicide and was found deceased inside of his van on March 18, 1989.

An extensive search was conducted by over 300 law enforcement officials, blood hounds and volunteers. Tonetta was never found. Tonetta enjoys pizza and fast food. She liked rap music and the musical artist Bobby Brown at the time of her disappearance. If you have any information involving this case please contact The Chattanooga Police Department (Tennessee) – Missing Persons Unit or The National Center for Missing and Exploited Children.

Peas in Their Pods Staffer
Posted by The Rilya Alert at 8:09 AM